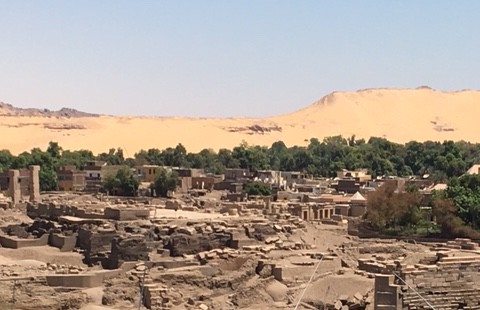 I have had a brilliant week on the River Nile, in the fantastic town of Aswan. I was sorry to be one of so few visitors, and sad to see the affect that is having on the country.

Egypt has been welcoming the world for generations, showing off its antiquities and treasures to those adventurous enough to make the journey. It has one of the longest histories of any modern country, emerging as one of the world’s first nation states in the tenth millennium BC.

This was my third visit to the Old Cataract Hotel, and it is always a concern of mine when returning to the same place – perhaps it has been spoilt, changed, or become too developed? Or perhaps my memory wasn’t quite accurate.

The Old Cataract was opened by Thomas Cook in 1900 – for the (predominately) British visitors who arrived after a cruise on the Nile, before being dispatched back to Cairo on luxurious overnight trains with lavish sleeper car and dining carriages – in complete contrast to the surrounding poverty. Residents include Winston Churchill, and Agatha Christie wrote much of Death on the Nile here, where much of the original was filmed.

It stands just north of the first ‘rapids’ on the Nile –where access becomes limited to small motor boats and the famous feluccas. I think it is one of the most stunning locations in the world. Soon after I married, I brought my wife here and, now, was excited to bring my three sons to visit. I needn’t have worried about the area becoming spoilt. Far from it. The town that has been completely reliant on visitors for over a hundred 100 years now has virtually none. Cruise boats have been moth-balled and occupancy rates at the hotel less than 10%.

The perceived security risk from terrorist Islamist groups is keeping visitors away. I was re-assured by the military presence around my Cairo hotel, making it look like a war zone. I also found the presence of soldiers on the army ‘carriage’ on my overnight train, as well as the armed plain clothed officer in the next-door sleeper berth to mine, guarding the few foreigners on the train, to be comforting. I am aware that others may think differently.

Tourism is not only about holidaymakers getting to know a country. It evidences that a country is ‘open’ – to business, to politicians as well as to more casual visitors. With over 92 million inhabitants, Egypt is the most populous country in the North African/Arab world. It has a strong military and its role as ‘link’ between east and west is vital. Its history means it is internationalist in vision. US Presidents would expect to meet Middle East leaders at the Arab League in Cairo. It was sad, therefore, that Trump visited Saudi Arabia instead – a country with a different outlook and agenda.

Egypt needs to urgently regain its status on the world stage and promoting visitor numbers is key to this.

Tourism is one of the leading sources of income, crucial to Egypt’s economy. In 2010, the sector employed about 12% of Egypt’s workforce an provided over 11% of its Gross Domestic Product.

Last year, Abdel-Fattah al-Sisi, Egypt’s president, famously told Egyptians that, faced with a faltering economy, they needed to make sacrifices—by not eating or sleeping, if necessary. Perhaps they could send him their spare change too, he said.

Rummaging behind the cushions hardly seemed enough to turn around an economy plagued by political instability, and by terrorism that had scared off both tourists and investors. At the same time as telling his countrymen to tighten their belts, Mr Sisi was squandering billions of dollars of aid from Gulf states on wasteful subsidies and on defending Egypt’s overvalued currency.

There are signs that Mr Sisi is starting to put Egypt back on a more sensible economic track. In order to obtain a $12bn loan from the IMF last year, his government raised the price of subsidised fuel and electricity, brought in new taxes and allowed the Egyptian pound to float.

It seems to have been just what was needed to lure foreign investors back into the Egyptian market. A sale of $4bn-worth of government bonds in January was more than three times oversubscribed, a sign of growing confidence in the Egyptian economy.

A weaker currency is also spurring some gradual growth in trade and tourism. Earnings from exports, along with new loans from the IMF and other sources, are plumping up the country’s foreign-currency reserves. In February, they hit their highest level since 2011, promising to ease a shortage of dollars that has hindered Egyptian business. Businessmen gripe that it is still difficult to get the dollars that they need, and the government is still clearing a backlog of payments to oil firms and other multinationals.

Benefits are yet to trickle down to the average Egyptian. Inflation has climbed to 28% and will probably remain high if the government cuts subsidies and raises taxes, as planned, this year. Prices for staples have skyrocketed; other products are no longer available. The protesters who toppled Hosni Mubarak, the strongman who ruled Egypt from 1981 to 2011, demanded social justice. So Mr Sisi may be wary of imposing too much pain on Egyptians.

But international investors and institutions are watching closely for any sign of backtracking. The IMF will review matters before sending Egypt more cash later this year. Tourism is key and, since it will take a while for camera snapping Americans to return to the Pyramids, a better focus could be on attracting the emerging markets – such as India and China – wishing to use their new-found wealth to discover the World. Volatility in their own part of the world also means they are less likely to be put off by security fears.

I am already planning my next visit to Egypt in the hope of attracting new clients. Egyptian entrepreneurs need the advice of a well-regulated financial planning firm. My family all loved their Egyptian holiday and I am planning where to take them to next year, to discover more of the country.

I am also certain that I will be back in Aswan one day. I expect it will then be teeming with visitors again, showing off its hospitable people and antiquities to the World again.